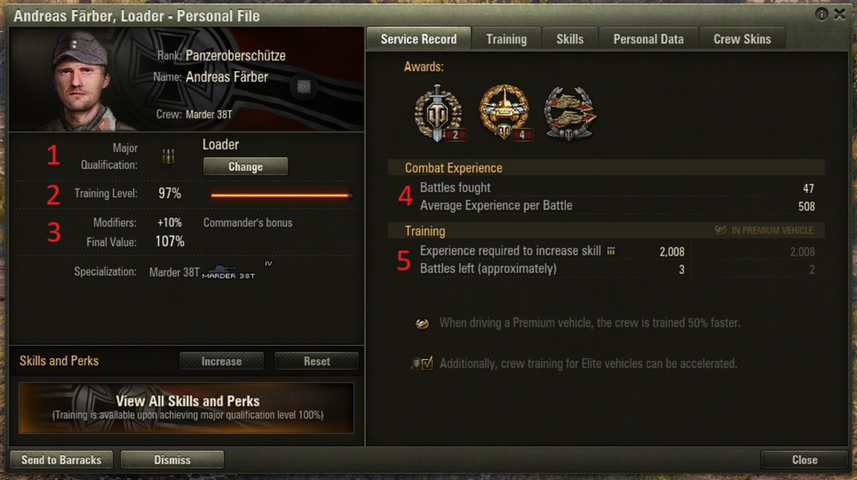 The journey from 0 to 100% is not linear. The required XP to increase training by 1% can be determined by this formula
XP for % training to increase by 1 = 2^Y x 25 x 100^(current skill %/100)
Y is equal to
​     Etc…
​
Below are 2 visual representations of the exponential XP requirement to increase 1% from 0 to 100% for each skill, as well the total XP required for each skill/Perk.
There are unique crew members that have a 0-skill Brothers in Arms perk. Because each consecutive skill/perk requires 2 times the XP of the previous skill/perk; a 0-skill crew HALVES the XP required to grind your perks. Among 0-skill perks are female crew members earned through campaigns that also have this 0-skill perk as well as their first perk trained to 100%. Additionally WG sells premium tank bundles that come with 0-skill crew members. To get more details head on over to my value guide for 0-skill Crew Members.
World of Tanks has begun to offer a free 0-skill commander for every month that you redeem your Twitch Prime account. Have Amazon Prime? Link your twitch account, and ​get these free commanders!

Where to Allocate Your 0-Skill Crew

Where should you put your zero skill crew? Ultimately it's up to you where you assign your crew. You can keep them together and have a full crew that earns perks quickly, or you can break them up, and assign them to tanks where one crew member is assigned 2 major qualifications. This will help that crew member earn an extra perk compared to the standard members in the rest of the tank helping to offset his extra qualifications. In tanks that have more than 1 crew member serving as 2 major qualifications such as the T-100 LT where the commander is also the radio operator, and also the loader! That’s a lot of perks to be assigned to 1 crew member. In that same tank the gunner is also a loader, so the commander and gunner share loader perks/skills.

Another observation that may impact your placement of these special crew members, is that Wargaming currently does not sell 0-skill crews for all nations. The nations that do have a 0-skill crew available for purchase (at time of writing) are listed below.


Ultimately it will be up to you which tanks you put them in, but I would not rush such a decision. Since females have a 0-skill BiA, and their first skill is fully trained (but not for 0 cost) they already start with 315,090 XP! I would recommend saving them for Clan Wars meta tanks - that have very small crews such as the Bat-Châtillon 25t which has the same crew load out as the T-100 LT described earlier.
[L2P] Fundamental Game Mechanics
7: Stun Mechanics
9: Crew Skills