A 0-Skill Crew and Why it is Valuable

TL;DR - 0-Skill crew HALVES the XP required to grind your perks (or doubles the rate at which a crew acquires all skills/perks)

The XP requirements for each consecutive training level is double the XP requirements of the previous level.
Note that a crew never starts below 50% of their major qualification. The retraining option “Rapid Courses” will retrain a crew for a vehicle at 50%. The 9758 XP otherwise required to increase the Training Level from 0 to 50% are therefore free.
​
Considering the XP you must earn to go from a tier 1 tank to a tier 10 tank is between 631K and 830K that means a vast majority of your crews will be working on their 3rd skill assuming you retrain for every tank using gold. If you use credits to retrain your crew then they will lose 10% or 44,153* XP from their major qualification if they are moved from to the same vehicle type (ie medium to medium). If you transfer them from one type to another (ie medium tank to heavy tank) then they will lose 20% or 68,857* XP from their major qualification.

How the 0-Skill Saves Training Time

The BiA perk is popular and generally selected as one of the first 3 perks players will assign to their crews.
Because each consecutive skill/perk requires 2 times the XP of the previous skill/perk; a 0-skill crew HALVES the XP required to grind your perks. 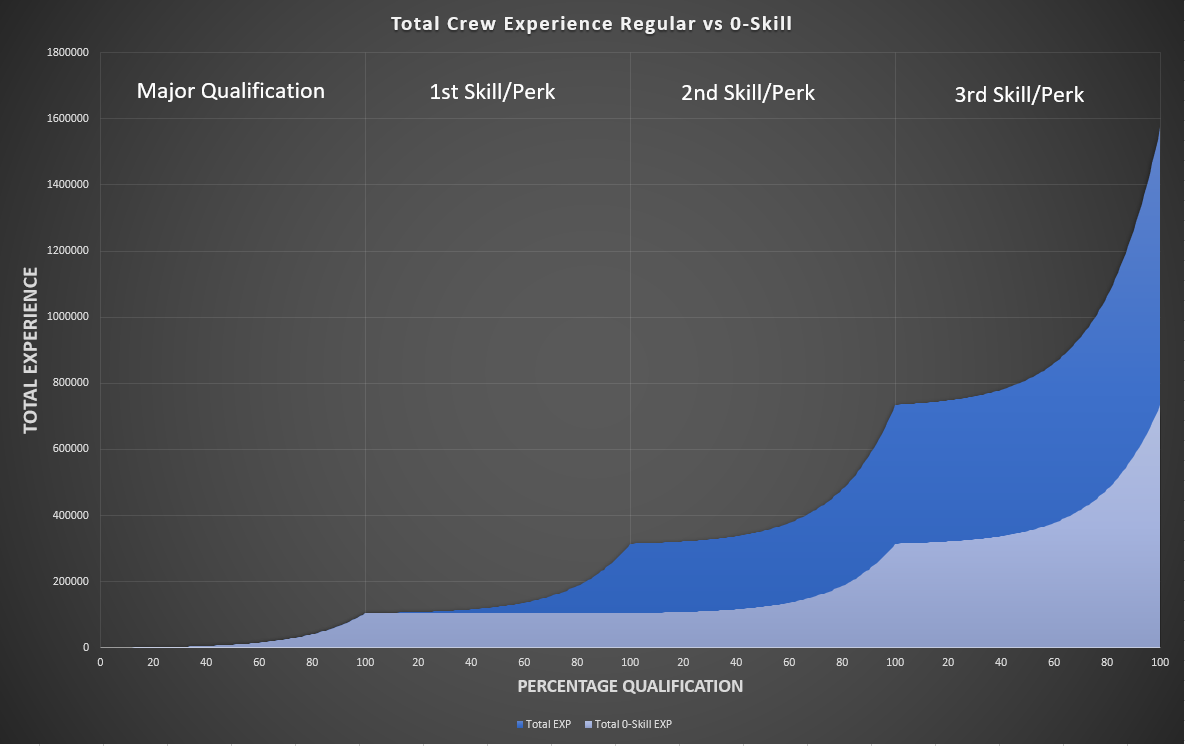 You can think of it as a crew that is trained twice as fast as a normal one. If you could research a tier 10 tank, two times faster what would you pay for that? Crews require substantially more exp than tier 10's do.
​
“Ok 13, you’ve convinced me to give money to Serb’s moon base, where do I get them?”

World of Tanks has begun to offer a free 0-skill commander for every month that you redeem your Twitch Prime account. Have Amazon Prime? Link your twitch account, and ​get these free commanders!

Bundles that come with 0-Skill Crews

* Losza is the commander for this tank, and he is the only crew member in this tank that comes with a 0-skill perk. Also note his 0-skill perk is not BiA but is actually Sixth Sense.
** Most recent sale of the Pudel, much to my irritation and frustration, did not include a 0-skill crew. Future Pudel sales may not come with one. I’m looking at you Wargaming ಠ_ಠ
+ Worth mentioning is Gianluigi Buffon a commander that has been available twice for in game mission rewards. One was a reward for "Battle Missions: Crew is Special" where he has 0-skill sixth sense for the Fiat 3000. The other was for completing all the missions in "Soccer Mode" which granted Buffon who was nation agnostic, with 0-skill sixth sense along with 100% training in BiA.

If you purchased a Cromwell B, and then want more 0-skill crew members for U.K. - don’t fret! You can re-buy tanks that come with 0-skill crews. You will get credited the gold for the tank (useful for re-assigning that crew), and another 0-skill Cromwell B crew will be sent to the barracks.

Where to Allocate Your 0-Skill Crew

Where should you put your zero skill crew? Ultimately it's up to you where you assign your crew. You can keep them together and have a full crew that earns perks quickly, or you can break them up, and assign them to tanks where one crew member is assigned 2 major qualifications. This will help that crew member earn an extra perk compared to the standard members in the rest of the tank helping to offset his extra qualifications. In tanks that have more than 1 crew member serving as 2 major qualifications such as the T-100 LT where the commander is also the radio operator, and also the loader! That’s a lot of perks to be assigned to 1 crew member. In that same tank the gunner is also a loader, so the commander and gunner share loader perks/skills.

You may have noticed something missing from that list - There have never been 0-skill BiA crews sold for some nations. Missing from the list are:

Where to use Female crew Members

If you didn’t already know, female crew members can be obtained by completing certain missions from either of the campaign’s in game. They are also sometimes available during holiday events.
​
The previous observation naturally points to where female crew members are best used. Since you cannot purchase 0-skill crews for the countries above, I would start by reserving the female crew members you can earn for those countries.. Ultimately it will be up to you which tanks you put them in, but I would not rush such a decision. Since females have a 0-skill BiA, and their first skill is fully trained (but not for 0 cost) they already start with 315,090 XP! I would recommend saving them for Clan Wars meta tanks - that have very small crews such as the Bat-Châtillon 25t which has the same crew load out as the T-100 LT described earlier. Even if the meta changes, you can retrain them with in the same country to different tanks. If you are a more casual player, then I would save them for your favorite tanks to play!

One side note worth mentioning Wargaming can always come out with more bundles with 0-skill crews in the future. We never really know what’s on the horizon. And I will update this guide if such a sale happens.