Are you new to the L2P Guide? Start Here
13Disciple | 17-Jan-19
Data was supplied by the WoT Wiki Page

If the pre-normalized impact angle is too high, than a shell will automatically ricochet. The automatic ricochet angle is different for each ammunition type. For AP and APCR shells, the automatic ricochet angle is 70°. When an AP or APCR shell strikes armor at an angle of 70° or higher, then the shell automatically ricochets loses 25% of penetration, and continues traveling in a new direction (further explained in the double penetration section below). It's possible to hit an adjacent tank with a ricochet, or even penetrate the initial tank with the same shot after it ricochets into a shot trap. HEAT shells auto ricochet at an angle of 85° or higher and do not lose any of their potential penetration after ricocheting. HE shells do not ricochet because they detonate on impact. 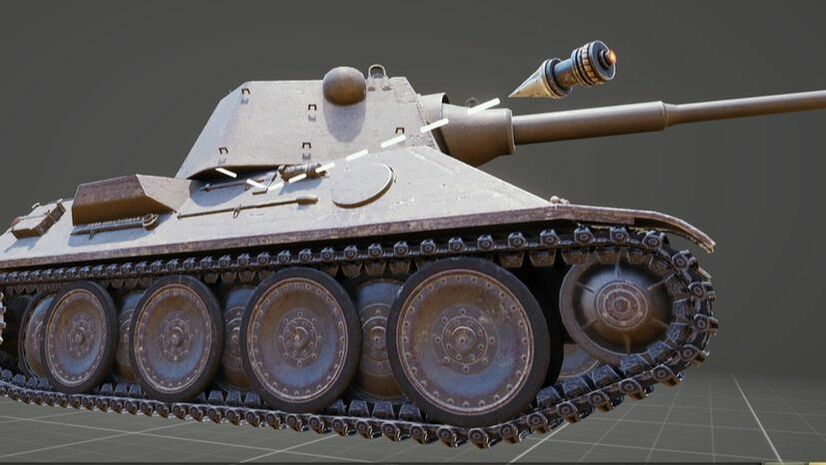 Ricochet can bounce, and still penetrate the original target

The physics of a shell normalizing on impacted armor is the result of torque. When a shell impacts an angled plate the momentum of the shell isn't carried in the direction the shell was originally traveling in. This torque effectively normalizes the shell to the armor plate. The mathematics that drive this in the real world are complex. It's represented in game by a simple reduction in the impact angle. For AP shells, the normalization is 5°. This means when the impacted angle of an AP shell is 60 degrees, the normalization parameter pulls that shell toward the normal and reduces it's impact angle to 55°. Each shell type has a different normalization we'll list later in the article. You can modify the original effective thickness calculation with normalization by subtracting it from the impact angle.

Note that for a shell caliber that is more than two times the thickness of the impacted armor, then there is greater normalization than the flat percentage calculated by the shell type. The math that describes this normalization is this:

If we use an armor thickness of 50mm, an AP shell caliber of 130mm, and an impact angle of 60°, then we can calculate the effect the Two Calibers Rule has on effective armor.

This rule only applies to AP and APCR shells. If the caliber of the shell fired is more than 3 times the thickness of the impacted armor, then the shell will not ricochet at all. Even when the impact angle is greater than auto ricochet angle of the ammunition type. The shell will automatically test for penetration, and the shell will still experience the normalizing described above in the 2 Calibers rule for normalization.

​If we use an armor thickness of 40mm, an ap shell caliber of 130mm, and an impact angle of 87°, then we can calculate the effect of all the above rules on the armor. 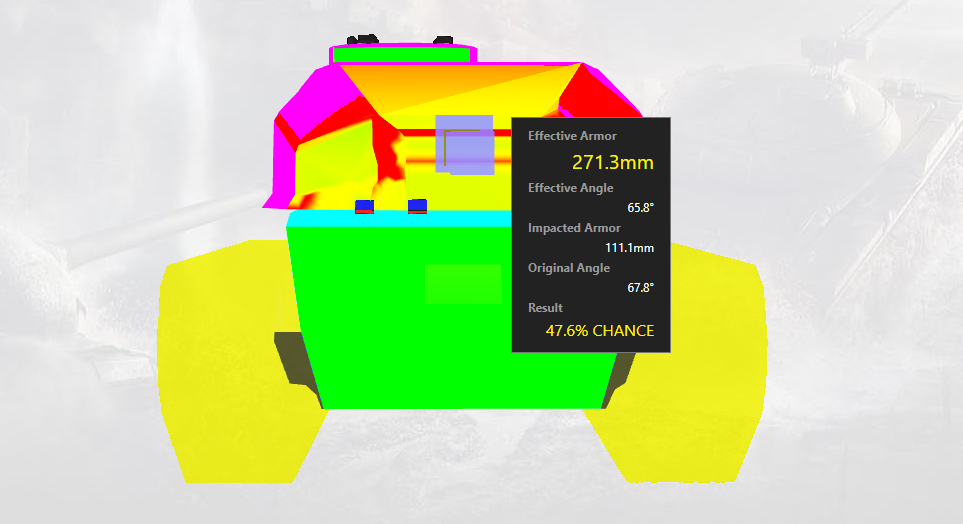 Percent chance on tanks.gg is based on a flat distribution curve - which is not accurate
Flat vs Gaussian Penetration RNG Distribution
If you have an average penetration of 200mm and you fire a shell at an effective armor thickness of 175mm then the difference between chance of penetration would look like this:

However on the other end of the spectrum, if you again have 200mm of average penetration and fire a shell at an effective armor thickenss of 225mm then the difference between chance of penetration would look like this:

Shells travel at tremendous speed, but they are traveling through air. This means that they lose penetration potential the longer they are resisted by air. This is represented in game as a linear loss in penetration over distance. Note that when you browse the average penetration of your gun it is assuming a range of 100m. As you go beyond that range the shell loses penetration potential based on the ammunition type.
The general rule of thumb is that the higher the tier of gun, the lower the penetration loss due to distance. Also light tanks tend to suffer the most penetration drop off from distance (this is to help prevent highest camo tanks from sniping and encourage them to engage targets at closer range).

When a shell strikes an armor plate it will continue it's flight path. In the event of a ricochet it will lose 25% of it's penetration potential and continue moving. However if the shell doesn't ricochet and hits the hull armor, spaced armor, tracks, or other external modules, then the shell tests for penetration as normal.

Lets say you hit a bit of spaced armor with an AP or APCR shell. The entry angle and penetration capacity are both calculated first. At the same time, the ricochet and the three calibers rule are both verified. If neither are triggered than normalization and relative armor thickness are calculated. If the shell has enough piercing power, it penetrates the spaced armor, and it's remaining penetration potential is reduced by the relative armor thickness of the spaced armor that was penetrated. Then if the above projectile hits the main armor the calculations are all done one more time.

If a HEAT shell hits spaced armor the interactions are a bit different. The three calibers rule doesn't apply, there is no normalization and ricochet angle is different. The chemical reaction creates a jettison of explosive material directed at the armor plate. If the shell penetrates the spaced armor, the jet will lose 5% of it's penetration capability for every 10cm of traveled distance. This is why HEAT shells rarely deliver damage when hitting spaced armor or tracks.

Special Ammunition
This guide is mostly focused on game mechanics in general, but it should be noted that at the initial release of WoT, there used to be 'gold' rounds. This ammunition was typically APCR, HEAT, and HESH ammunition types. They were typically the exact same as their standard counterpart only with higher penetration at the cost of gold. To reduce the pay to win aspect, these rounds were eventually opened up to be purchasable through the in game currency credits (silver). This means these rounds were still better than their standard counterpart - just cost nearly 10 times as much. As of last year Wargaming has completely eliminated the ability to purchase gold ammunition for gold. Late in 2018 it was announced they would be looking to re-balance this main part of the game. The proposed solution is to rename the ammunition to 'special' ammo, and reduce it's damage, for higher penetration, and even out it's cost. I'll update this guide if (when?) this re-balance hits the live servers.

In general on most tanks, the commanders cupola, drivers hatches and lower glacis plates act as weak spots. Frontal armor is always strongest, followed by side armor being weaker, and rear armor being the weakest. You can check the odds of penetrations live in game.