13Disciple | 13-Dec-2021
As a WGNA CC, I was provided with 200 Holiday boxes (50 of each type) for the purpose of making content on Twitch and for this article. I've supplemented this data with users that sent me their videos and screenshots.

This type of written article takes hours and hours of data entry, on top of putting together the tables and graphics. If you would like to support my work, please pop on over to my Twitch, or my YouTube page and check out my content.
These boxes are yet again excellent value. If you want to put gold or premium time (purchased for gold) in your account, I would recommend purchasing large (gift) boxes. This year sees the introduction of a new guaranteed vehicle mechanic. Now you are guaranteed to get a tier 8 vehicle drop after 50 large gift boxes.

While I would still like to have the tanks sold outside boxes, this is a big improvement to consumers. It effectively caps how much you will need to spend to get the exact vehicle you may be fishing for.

A note on data: I want to thank everybody that has submitted data to me. This year I was able to get 5,347 total boxes entered for this data.
The gold value of a tank was pulled from the Holiday Ops News Article on World of Tanks.

These values are roughly 37 gold per box or ~ 3.8% higher than last years averages. However, this difference sits within the confidence interval, meaning it could be caused by sample variance.
Lets take a look at the Gold per dollar value year over year (YoY) changes. The first year I did this analysis I only used 225 boxes. I placed the sample size in this chart so that it's clear to you that the lower sample size could point to inaccuracy of the actual value for that year of data. 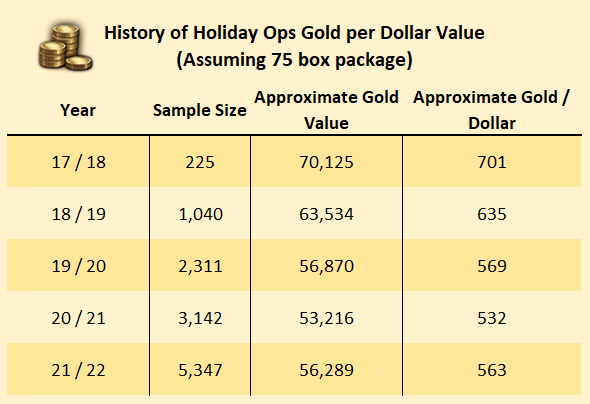 This year's value puts it in roughly the same category as the last 2 years. If we consider the frequent War Chest bundle of 25,000 gold for $100 USD which yields 250 gold per $1 USD. Using this benchmark, it's quite clear that the 75 box bundle is still the best value available for World of Tanks content annually.

If we consider the worst case scenario of buying two sets of 25 boxes for 80 USD, and assume only 1 premium was the result and it was the lowest value tier 8 premium, we'd still get about 258.75 gold per dollar. Which means even in the unlikely event of a worst case scenario, holiday ops boxes are still the best value year round when compared to the War Chest bundle.

Drop rates from the data for standard items

Drop rates from the data for low tier vehicles

PLEASE NOTE: Because the tank drops at tier 8 are guaranteed to drop un-owned tanks first, this will skew the percent drops toward the vehicles that haven't yet been on sale in the premium shop.

This higher drop chance at tier 8 also accounts for the lower percentage chance observed in 'standard' and 'low tier' drops.

Drop rate for tier 8 vehicles from the data

This holiday season brings with it new 3D skins for tier 10s. New this year is the FV4005, Obj 268 V4, Vz. 55, Sheridan, ST-II, and Rinoceronte. Along with these new skins, it was also possible to draw the skins from last year: CGC, Maus, 60TP, STB-1 and WZ-111 5a. Adding in the 3D styles from last year's holiday Muddies the draw rate a bit. If you were missing both sets, then you'll get random pulls from both. Because of this, I decided to list the average number of boxes to pull five 3D skins, so that if you are going into this Holiday missing only the new ones, you know roughly the average number of boxes to draw them all. Once you pull all five new 3D Styles, you are unable to pull duplicates.

For a bit of humor I've added in the luckiest boxes again - based on average gold value. We don't have a large enough data set to show a normalization of expected equality across all of these, but I thought it was humorous to list anyway. Unsurprisingly Magic boxes are at the bottom as they were the least reported set of boxes in the data set. 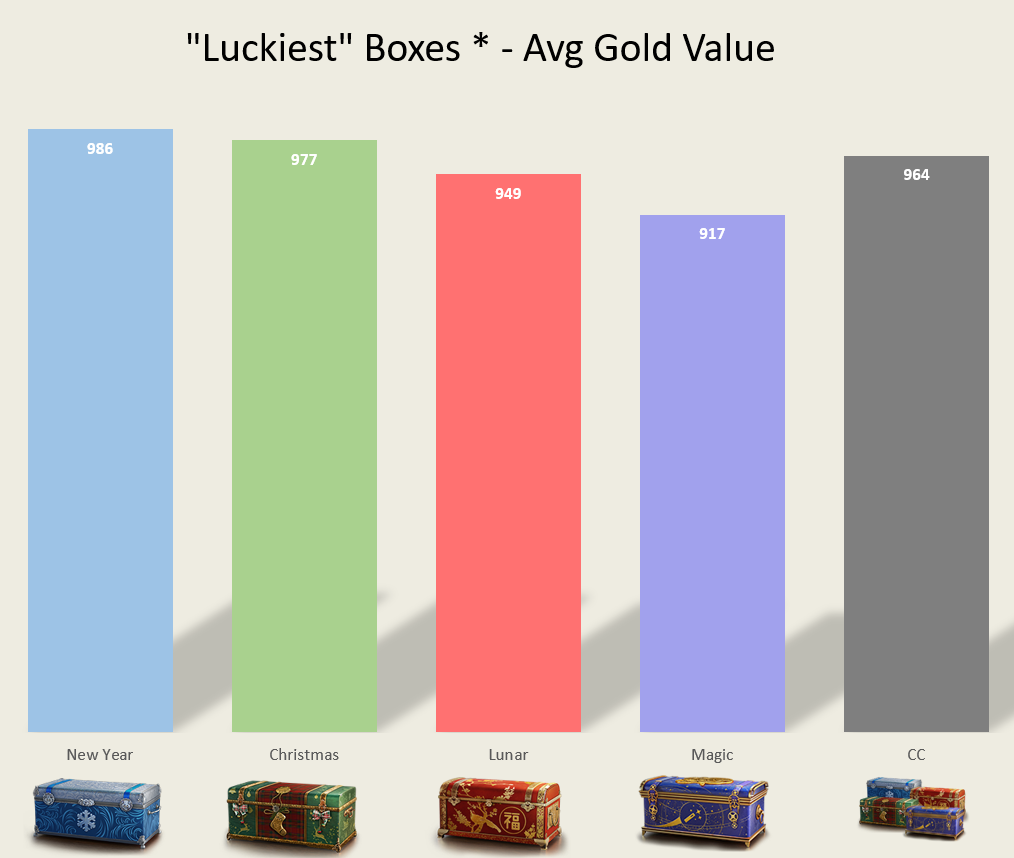 There are two main points of contention for Holiday Ops this year. The first of which was an error they published in the original article stating that each large box would produce a non-duplicate ornament. The reason this is a point of contention is a basis of the second criticism. However before we get there, Wargaming has since updated the article, and has offered compensation of a non-duplicate charge, and 1500 shards for each large box purchased from the start of the event up until 2 hours after the article was changed. While I believe this is to be appropriate compensation, it still feels lacking as many people purchased the boxes after reading the article originally. Many people did not go back and re-read the article. It wasn't until much later that a separate article even appeared on the web portal stating the compensation to those that already purchased boxes, that many buyers only then realized the original had changed. These buyers bought boxes assuming they would get non-duplicate ornaments, yet they still fall outside the compensation window. 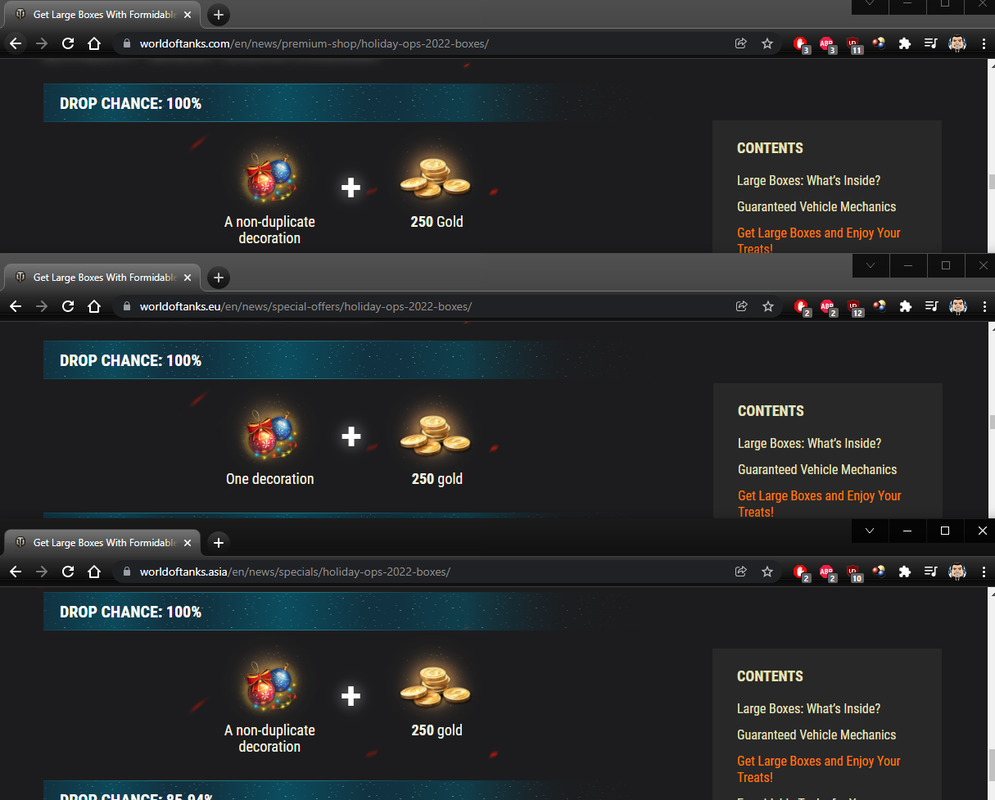 An infographic had incorrect information regarding the Decoration in Large Boxes.
The Second Criticism is regarding the Holiday Ops Ornament Collection. In Years past, Wargaming would provide me 200 boxes (a value of over $250 USD). Because of all these boxes I was typically able to finish or at least complete the credit bonus within the first week of the Holiday Ops event. This year Wargaming has eliminated the ornament tier system, all ornaments are one tier, and there are fewer of them. Not exactly a problem, however after opening over $300 USD worth of large boxes on my account I'm still not at the complete 50% credit bonus. I've given up on completing all of the ornament sets at this point, and instead I'm slowly plugging away at daily missions and the new parcel mechanic (which replaced snow maidens) to try and inch my way into completing one full set. For some one that has opened over $300 USD worth of large boxes, it feels pretty bad that I cannot complete the ornaments this year.

Thinking about this from a free to play perspective, there is no way a free to play player will ever get the full 50% bonus, and it's highly unlikely they'll even finish a single set for the camo. Wargaming miscalculated the ornaments this year, and it's frustrating the player base. Additionally the aforementioned "non-duplicate" ornament advertisement further exacerbates this issue.
I do want to give a shout out to all the people that spent time filling out those spreadsheets, again, none of this would be possible with out you. Feel free to stop by and say hi on my Discord or join me on Twitch. Let me know how Holiday Ops went for you this year.
Special Thanks To:
Everybody in the Discord Channel that provided your data!
I had hundreds of messages between Reddit, WoT Forums, and Discord. Thank you for supporting the data that allows me to post this type of content.