Are you new to the L2P Guide? Start Here
​13Disciple | 5-Jan-20
This method for gradually learning all armor profiles as you progress through the game will still hold true (and be more relevant) after WG has made their proposed ammunition changes in the announced balance update.

One of the advantages that players with more experience will have is armor knowledge. They will be able to maximize their vehicle to vehicle trades better by simply knowing what they need to do in order to damage certain vehicles. By knowing your enemies defenses you'll know if you can trade with your opponent, and how best to do that efficiently.
My expectation for you to memorize the armor profile of over 500 vehicles is unrealistic (at least for those of us that aren’t gifted with an eidetic memory). Therefore I’m going to give you the method I use to get over the hurtle of unknown armor profiles, and how I handle this problem post battle.
When facing a tank that is new, or I have forgotten the armor profile of, I probe for weaknesses with standard ammunition, and using the armor penetration indicator (you can find an explanation on this feature at the end of the penetration guide). I hover my reticle and try for the commander’s hatch, the driver’s/machine gun hatch on the hull, and the lower glacis plate. Prioritize the location you are probing by what is easiest to probe and will expose you the least amount to the enemy. Not tall tanks will have these weak spots, and not all tanks will have them as weaknesses. I will then take my shot if I see a green indication, if not I’ll take a shot on the yellow and hope for a high RNG roll on penetration. A big problem with this method is that for every area of probing I check if I am trading, I’m taking damage for potentially no damage. I recommend only probing armor as a last resort unless you are angling well and expect little to no damage in return, or if you are firing from concealment.
If you have exhausted those probes,  failed to penetrate and all armor checks you made were yellow or red for most of these surfaces, then change to higher penetration ‘special ammunition.’ and repeat the steps above. If you still fail to find an area of weakness that you can penetrate then you are left with 2 options.
1) Fall back and try attacking a different target, or make an attempt to flank the highly armored target for side shots.
2) Switch to HE and see if you can chip away at the tank this way. Only do this if you have a higher than average caliber gun. See my guide on maximizing HE Damage.

After the match if you are left scratching your head on what you could have done to have damaged an opposing tank. There is no use in beating yourself up for something you didn’t know, and there is no point in getting angry at that player who was in the opposing tank for your lack of knowledge. Its better to improve your understanding than get angry. The next step is to check the armor profile in a 3D checker and make notes to yourself for the next time you see one of these heavily armored behemoths. Alternatively if you are aware of new tanks that have been introduced, you can do the same method before ever seeing your first one in battle - hence the 'pre-battle check' in the title.

There are several places you can go to check for armor profiles. I’ll only cover my favorites here. 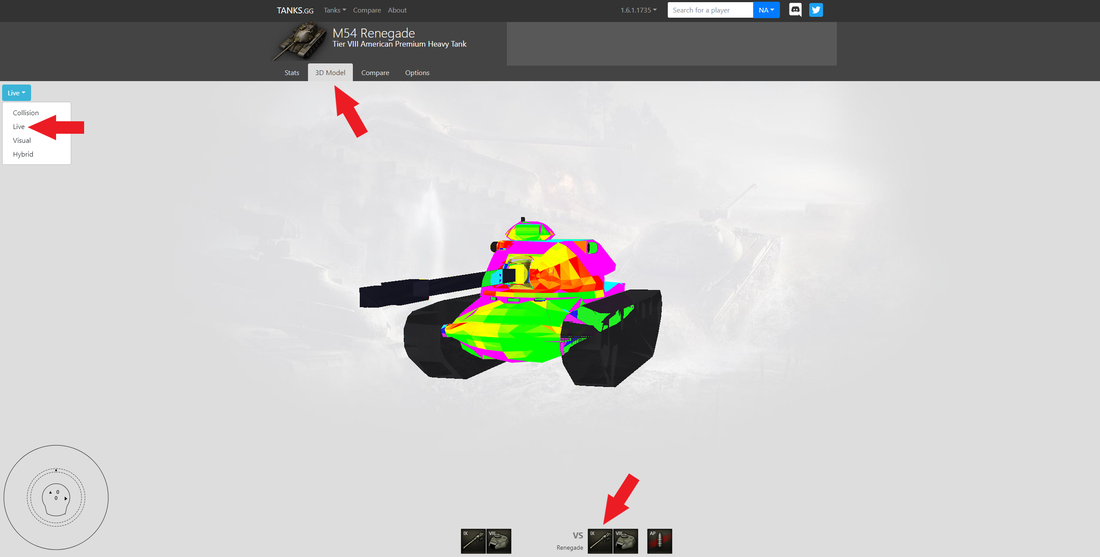 I typically just type the tank’s name followed by tanks.gg to get to its statistics page quickly. Once on the vehicle stats page, click 3D model. Here you can inspect it as is, but I find it helpful to see how the armor changes as the 3D model is angled so I generally click the dropdown and select live view. The live view will shade the tank by its armor protection helping you see the effect of angling. Note that this view is showing you the armor as it holds up to its own gun. At the bottom of the screen you’ll see which gun is selected. If you want to be very thorough you can click that and find the tank/gun you were using and check the armor against that. Typically I just tab back to the garage to see the average penetration on my standard and regular ammunition and then use my mouse to hover over the live view of the armor and comparing it to the 'effective armor' value. Messing around with the 3D model should help you find out what you can do in the future to damage the opposing tank frontally (if you can).

The next featured site is wotinspector.com. This site has some features that tanks.gg doesn’t and it's worth visiting to get the extra information when needed. This is the site I use when I’m confused about why the tank I’m driving suffers consistent module damage. First you need to search out the vehicle you are interested in. At the bottom of the page you can select the shooter and the receiver to check penetration chances. However where wotinspector really shines is that some of the models contain the module layout! In the top left of the window select x-ray, and then select modules. This will allow you to see the module hit boxes. For more information on how module damage mechanics work check the guide here. 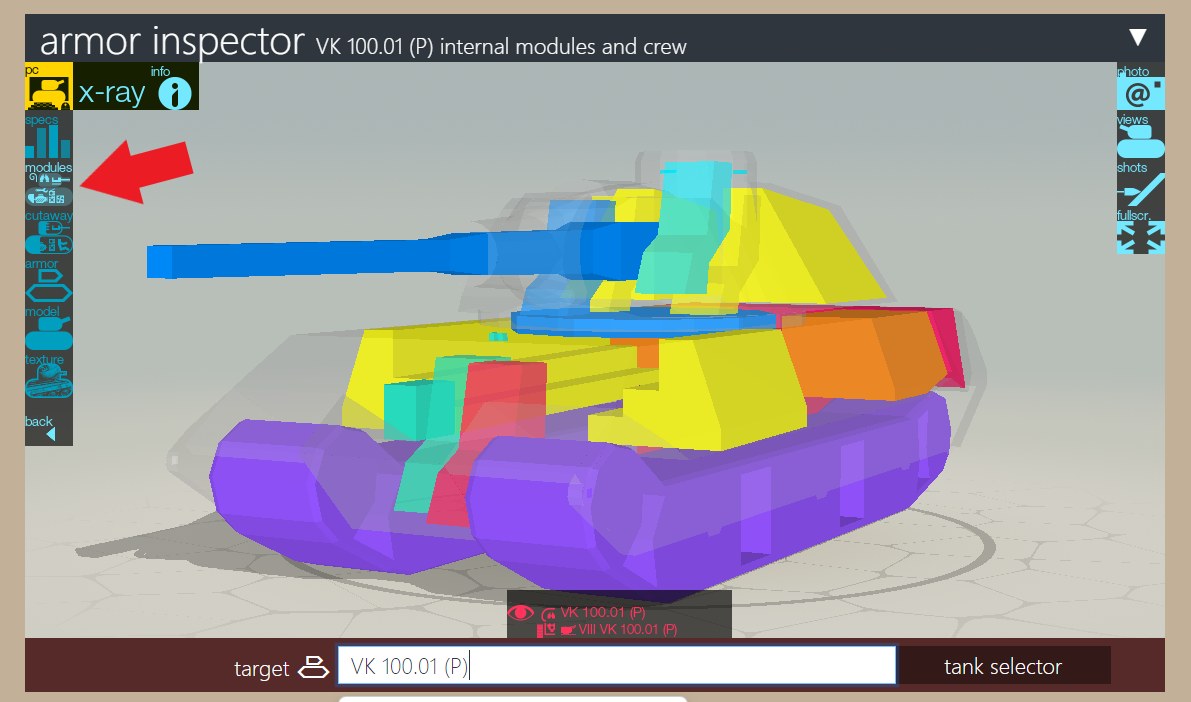 Head on over to the official WG mods page to download the official Aslain's Modpack. This is an installer that you can run and select the mods you wish to install from a large compilation. Inside you need to select the armor inspector in the hanger. Once installed if you right click on a vehicle and click preview, then all you need to do is select the tab from there to view the armor layout. This is the one I use on stream in the interest of time and convenience, but I think this provides the least amount of information because it doesn’t not shade the entire armor plate, nor does it show modules. 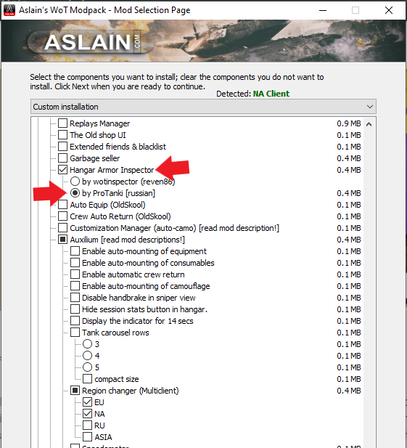 Once you have done your due diligence with inspecting the subject tank that you didn’t know how to penetrate, there is one more step I typically do. If the tank is a tier 8, 9 or 10 then I check its armor against the typical tier 8 gun (if I hadn’t already done that). Most tier 8 premium tanks with reliable guns tend to have penetration that is between 210 and 230 on their standard rounds. I check the armor against that penetration to see in the future when I queue in with a premium tank. I can then know in the future when I’m grinding credits / crew, if I can penetrate the subject tank with regular ammo, gold ammo, or not at all head-on.
This method should work for most players, even those with self described bad memories. Eventually you’ll have looked up the same tank so many times you’ll eventually begin to remember what you’ll need to crack through the armor. This method can be especially useful for returning players, when there is a plethora of new vehicles and you don’t know how many or which ones are even new.

The goal is that eventually you’ll know by just analysing the team composition before even spotting an enemy on the battlefield who you should be trying to fight against, and how to penetrate their armor. There will be tanks of 2 tiers higher with armor models that you simply will be unable to deal with. When tanks are in the battle that you cannot penetrate then you need take a position where you can influence the match on the tanks you can damage. After that your only recourse is to try and set up in a place to get side shots, and/or support your top tier tanks so that they can take out the heavy armor (by tracking or distracting etc..).

In World of tanks current state (1.7.0) There isn’t enough difference between standard ammunition and special ammunition, beyond cost, that forces players to make meaningful choices in a match. Granted there are some mechanics that change between these shell types (take a look at the aforementioned penetration mechanics guide) such as normalization and spaced armor interaction. However there are players that do not have the time or patience to learn armor models, and choose to only fire special ammunition as the increase in penetration on some shells simply makes them the easy choice. When these are only balanced then by the shell cost, then some players can afford to only fire special shells. This creates a somewhat lazy approach to learning armor and doesn’t feel rewarding to the players that have done their due diligence, or the player who is only loading their tanks with these shells.

When (if?) the shell rebalance hits the live servers, standard ammunition will give players a damage boost. That means all players may want to revisit their standard ammunition and perhaps be a little more hesitant on when they switch to special ammo. My recommendation is to treat the game as such now (for improved credits per match) and to best prepare you for the ammunition rebalance. All appearances show that WG is committed to bring this to the live server sooner rather than later. They have issued over 4 sandbox tests, and spent almost the entirety of last year preparing for this, putting on hold 430u, amx 30b, and E100 balance changes in order to focus solely on this shell change. Best to get ahead of the curve now, so when it hits, you are are ready.
[L2P] Micro Position and Micro Plays