How Marks of Excellence Work

In World War 2 tank crews would mark their barrels as a tally for the number of vehicles they’ve destroyed in battle. These marks were adopted to World Of Tanks to show a player’s mastery of a particular vehicle in game. Similar to a mastery badge, marks of excellence (MoE) reflect a players average damage + assisted damage instead of experience.
Earned marks of excellence are permanent. Once you have earned a mark of excellence you will never lose that mark even if your average drops below the threshold, or if the threshold goes up. You won’t lose that mark even if you sell that tank.

How Marks of Excellence are Calculated

*Note that the original source for this information has been lost, and cannot be referenced. Information was provided by CraBeatOff and CernoAlpha, through communication with major rampage on the WGNA skype group several years ago. There are rumors of a WG blog post as well, but I have been unable to locate an archive of this post. The information I used for this article is located on the Wotlabs Forums.
Despite the text from the game saying that they use the last 100 matches, this is somewhat misleading. The math actually uses an exponential moving average, that is recalculated after every match where 100 is the number of matches that the average is weighted against. This means that every single match is actually used to calculate your moving average with your oldest matches weighted exponentially less than your most recent match. Doing the math this way allows the client to store 1 (exponential moving average) value instead of the last 100 matches of data. It then compares your average to that of the server over the last 2 weeks and awards marks based on that comparison.
How your average combined damage is calculated after a match.

*To clarify - yes, the game looks at tracking assist and spotting assist and only uses the higher of the 2 values.
Let’s use a couple example cases. Lets say your pEMA or your moving average prior to the match was exactly 2000 average combined damage. If you play a match and generate exactly 3000 combined damage for that match then your EMA will be updated like this:

Conversely for a bad match, let's say using the same data above but during your match you earn a combined 1000 damage for that match.

This is also why you cannot earn a mark of excellence after only 2 matches. Lets say your first 2 matches are exactly 2000 combined damage. The EMA would look like this:

How EMA is Impacted by Average Damage and Consistency

In these next few examples I've established a theoretical tier 8 tank. Our theoretical tank has these EMA's on the server that establish our MoE thesholds.

These graphs were developed using R in R Studio with the help of CraBeatOff and Iron_. You can download the code and experiement with these values over on Iron_'s GitHub. 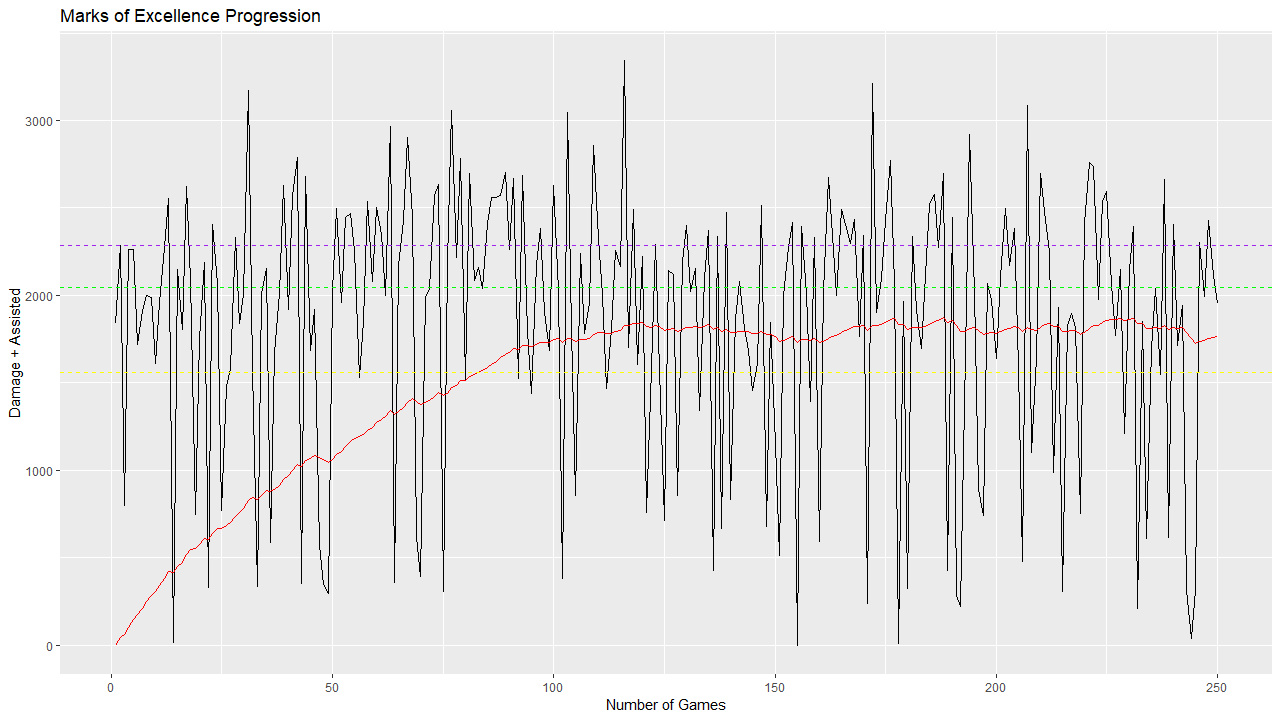 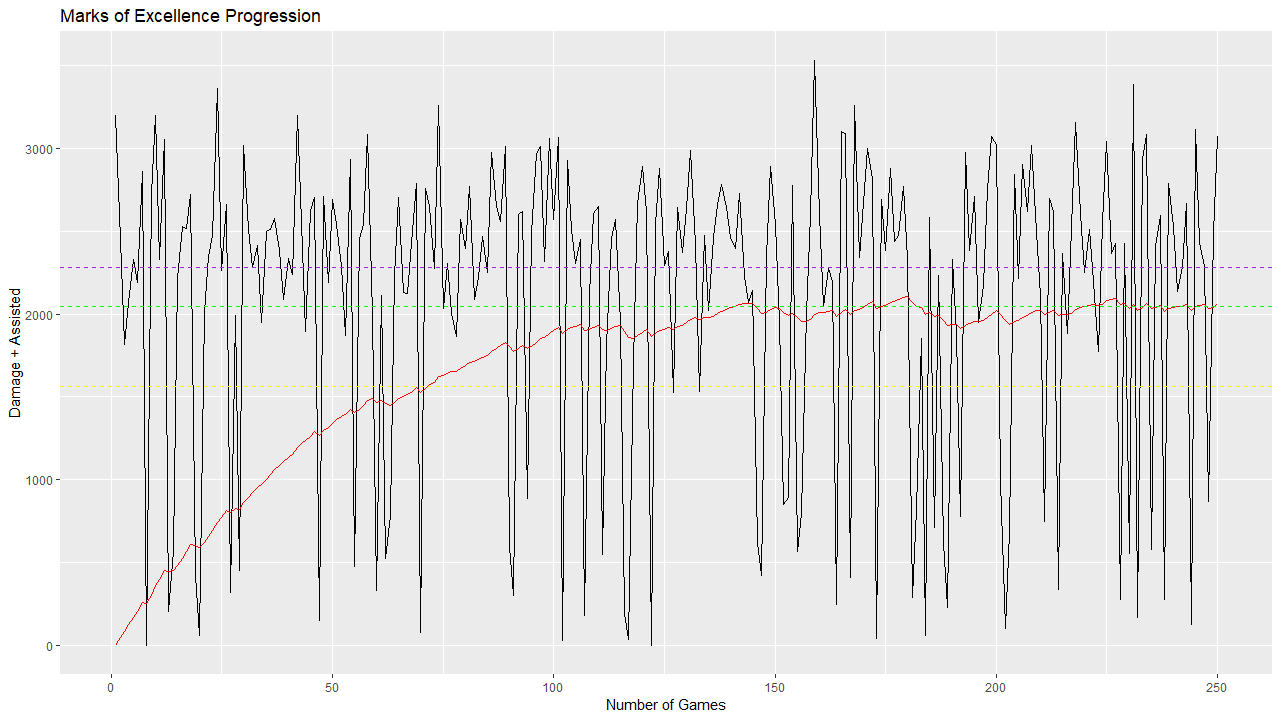 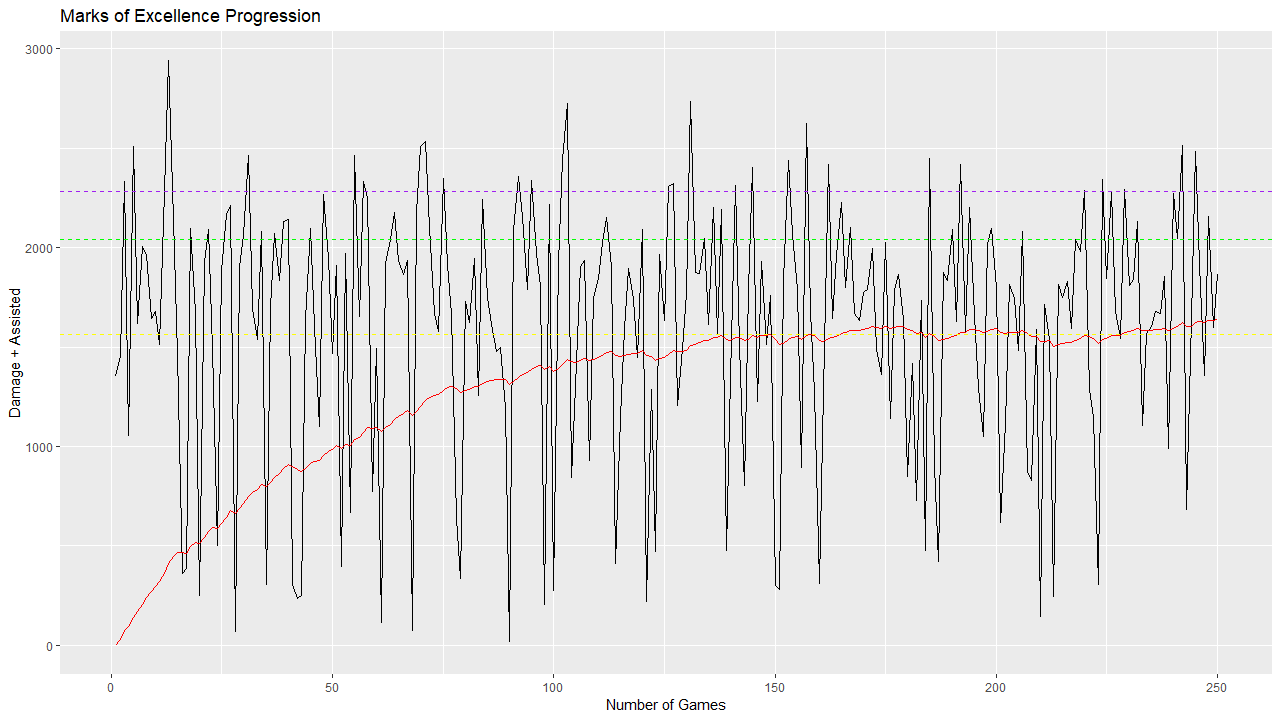 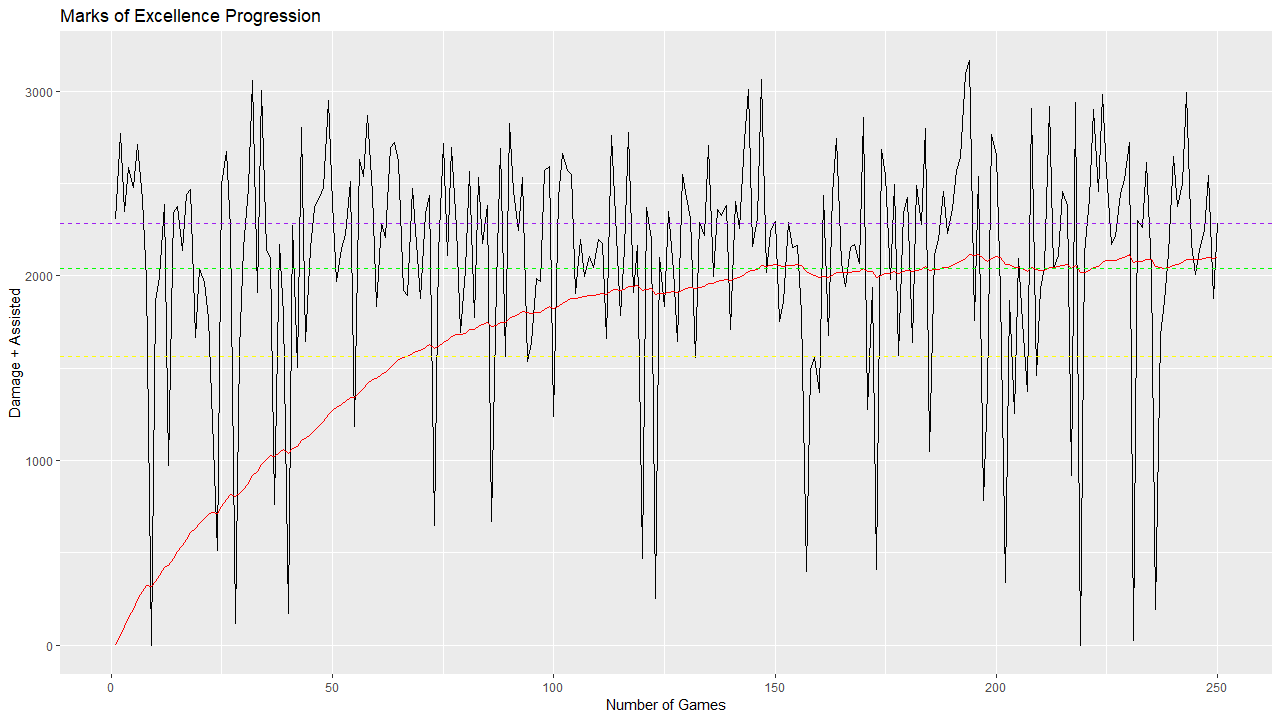 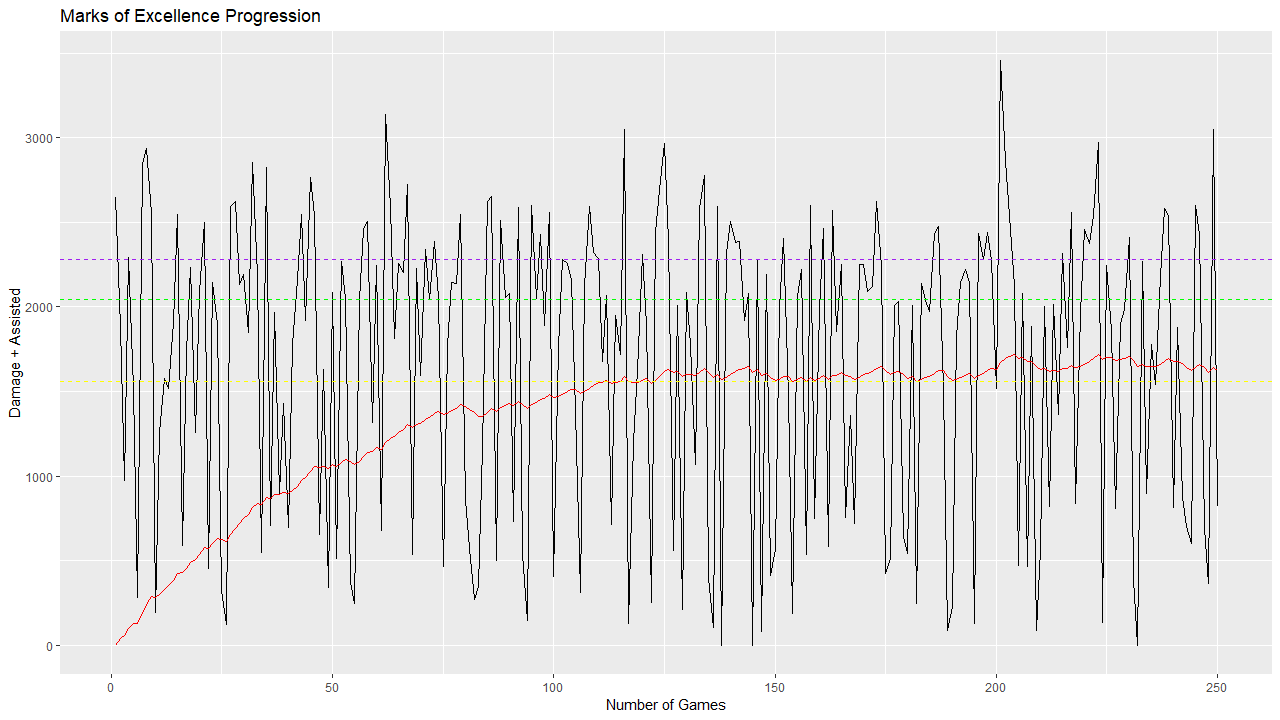 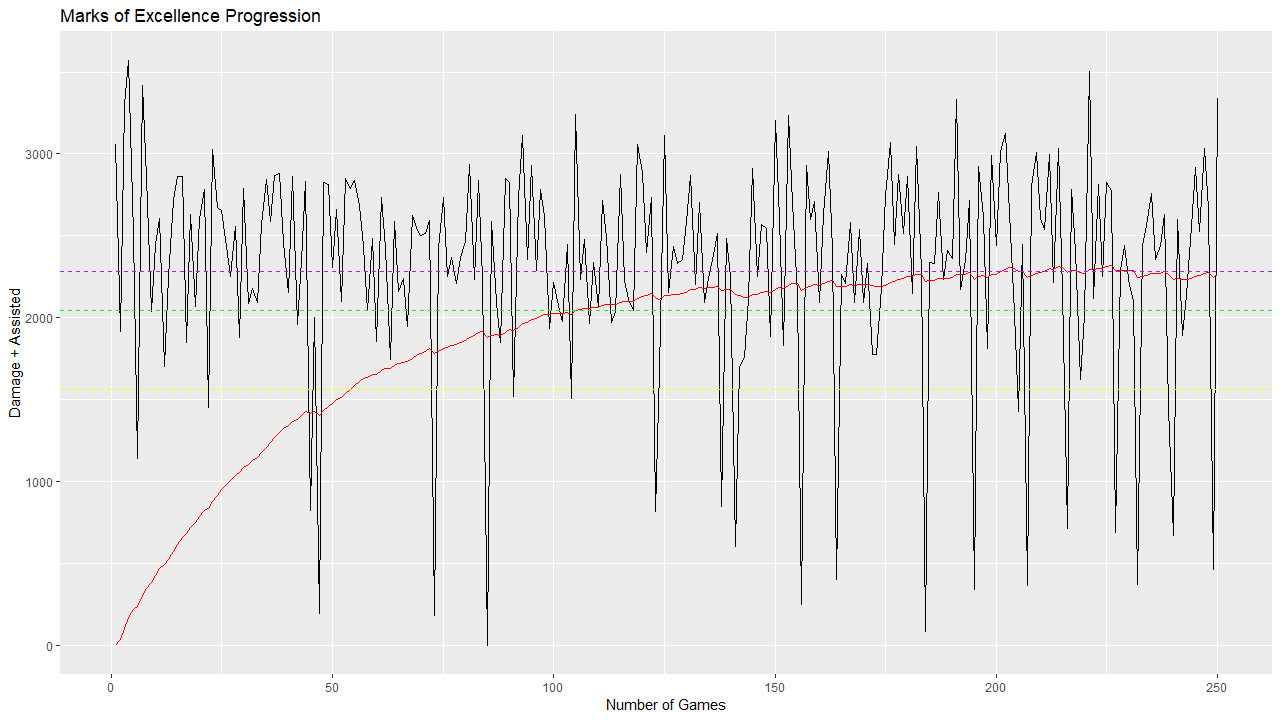 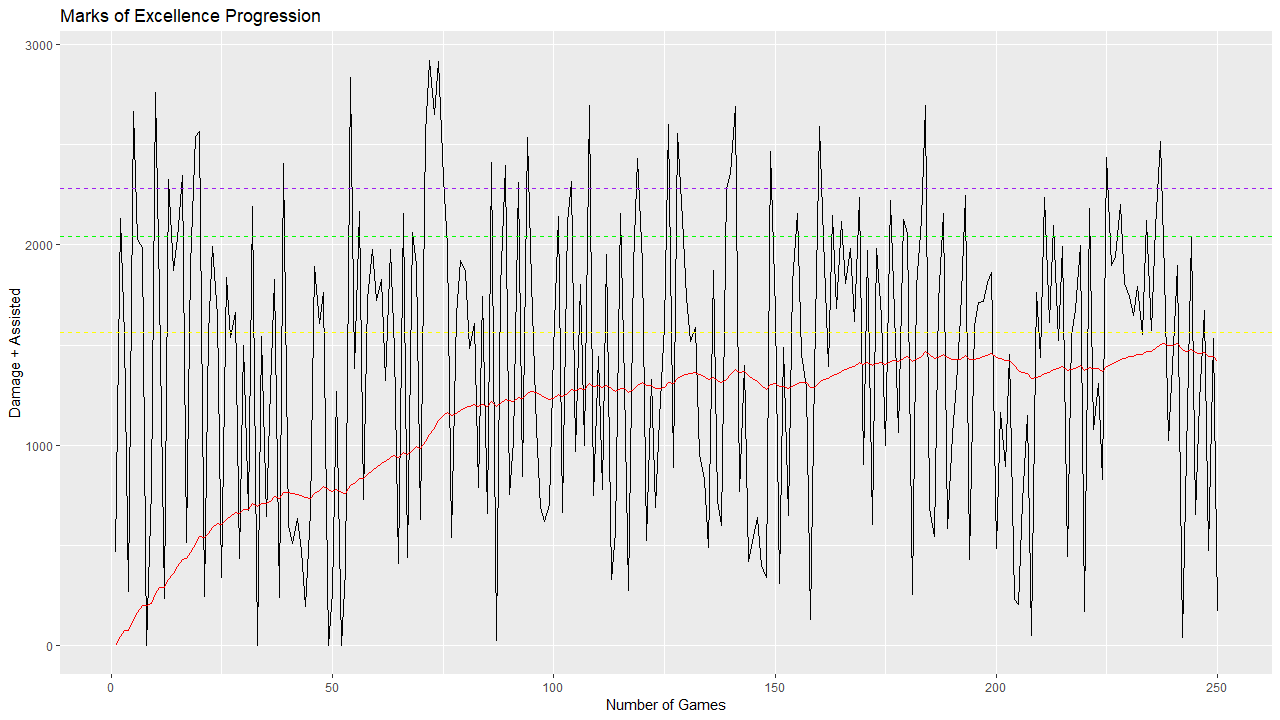 Streaks can have a massive impact on your MoE progress. Achieving a MoE can really just be about getting one good run of consecutive good matches. However a bunch of bad matches can massively drop your EMA. In the first example below we see a streak of 15 great matches pushes our player to 2 MoE. However a streak of only 10 horrible matches completely tanks the EMA in the second graph. A bit of advice from me - if you are on tilt and you begin to experience consecutive bad matches in a tank you are close to marking, stop playing it. You can keep playing WoT, but stop playing that particular tank. Come back to it after you take a break for a few hours, or in a couple days. Don't chase your EMA down in the mindset of "I must undo that last match." 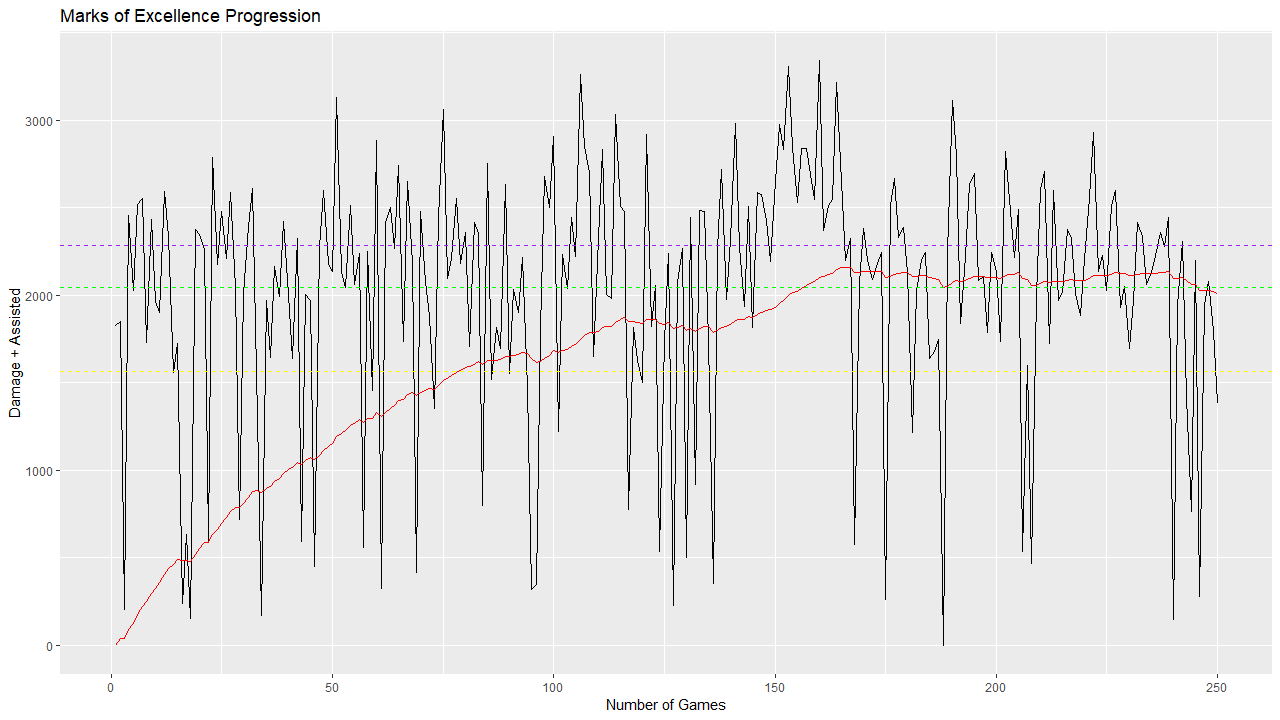 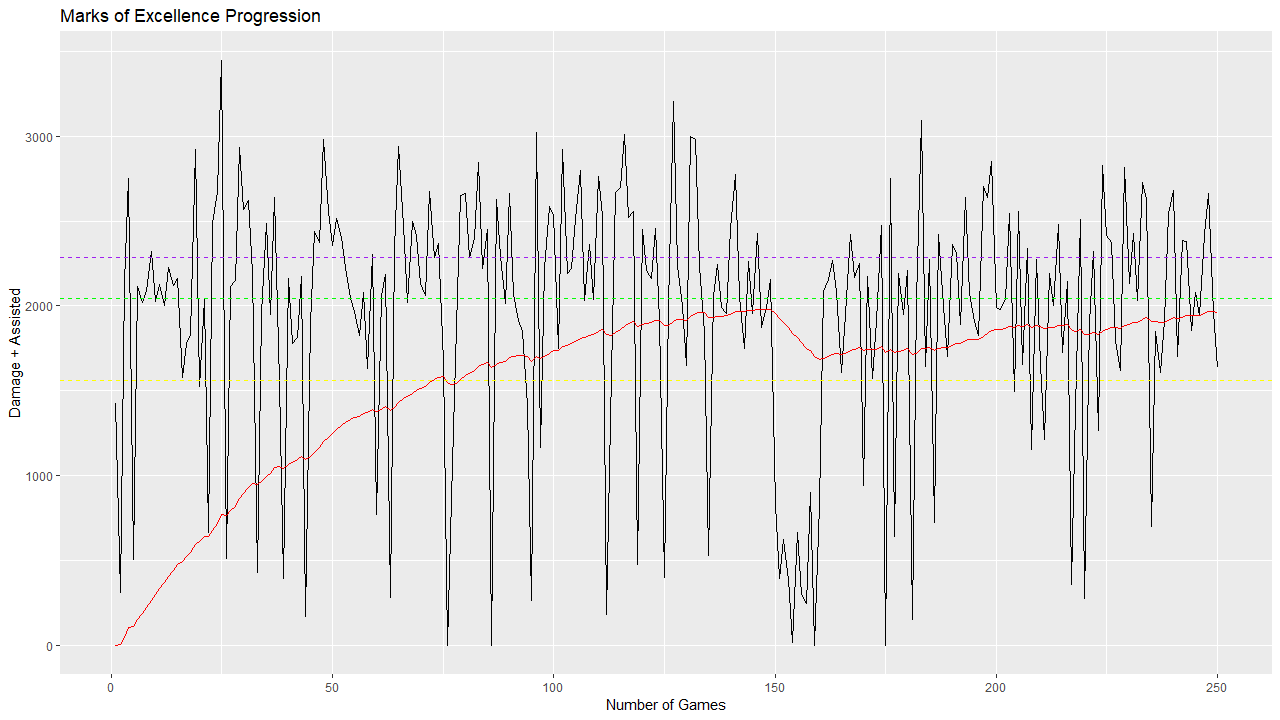 It is unclear how wargaming calculates the server average. The in game description claims that the server average is based on 2 weeks of historical data. This implies that the server maintains the EMA of all players on a single server for every single tank over 2 weeks. It then uses those EMAs to determine the 65th, 85th, and 95th percentiles for Marks of Excellence.

Regardless of how the server value is calculated - we do know that it changes. The server value is updated daily at the server reset, thus the 14 day average shifts every day. Dropping the last day off, and bringing the most recent day in at the time of server reset. The observed average values are pretty stable except during balance changes or a small player base for a single tank (looking at you ISU-130 ಠ_ಠ). The EMA you must exceed isn’t displayed for you in game, however you can estimate the values based on your own percent change. This estimate is also how we can confirm that the math previously discussed is accurate.

If you manage to earn 100% MoE that doesn’t necessarily mean you have the highest average combined damage on the server (although you might). It means you are in the top 1% of players for EMA of combined damage for the last 2 weeks.

Sometimes after long breaks people will return to the game and see a large change in their MoE percentages. During short periods of time, the expected values from the server change little, however over long periods of time especially with balance changes, major updates, and server population fluctuations, the expected values can change dramatically. When you return and play a match the MoE is updated and then compared back to the server value. This is why you may experience a large jump or a large fall in your MoE progress. Your overall EMA will not change very much, but the server average may fall or rise by a wide margin which is why your percentage can change so dramatically after playing a tank you haven’t played in a long time.

I have personally experienced my MoE jump by as much as 3-4% (up and down) after as little as a month of not playing a tank.

Some players will use incoming game patches to strategically make achieving a given MoE easier. For example if a tank is expected to see a large nerf, a player may play the tank as well as they can until the patch drops. Then they will not touch the tank for at least 2 weeks, or more. As players on the server play the nerfed tank over time the EMA server values will fall (in correlation with the nerfed tanks performance). That player then only needs to play 1 match after enough time has passed and even though the EMA doesn't move much for that one match, the expected value will have dropped and they could end up 3 marking the tank on the next match. The opposite can also be true, if you know a tank is expecting a large buff, you can get your mark as high as possible prior to the patch, and then on the day of the patch you can make a push to get that mark up - taking advantage of a tank that performs better than it previously did, while it's still being compared to the server average prior to the buff.​

Putting it all Together

Triple marks of excellence are so hard to achieve because you are required to play at a 95th percentile level consistently. It's easy for skilled players to put up a good match. It's extremely difficult for even skilled players to put up consecutive good matches. It means that  players must achieve many matches at a better than 95th percentile combined damage - regardless of the matchmaking and the map selection. This knowledge can help you come up with overall strategies for your tanks as you drop into matches. For someone that is going for triple marks of excellence a bad match isn’t a loss. A bad match is one in which you did little damage, little assist damage, or a combination of those. It's important for players pursuing marks to recognize why a particular match went poorly and develop strategies for themselves to avoid performing poorly again in similar situations.

This is so challenging because every match in World of Tanks is a bit of a puzzle mixed with a bit of chess. Matchmaker can spit out 3 tiers of different tanks at any moment in time on any number of map styles. And you as a player have to figure out how to solve that puzzle and move your chess piece to maximize your assist and raw damage in order to hold and push that Mark up. Triple marks of excellence are awarded to the players that were able to perform excellently in games with extreme consistency.