13Disciple | 21-Nov-19
Shout out to @Domosapien for requesting Ranked feedback! You can provide your own feedback here.
Armor models and statistics provided by tanks.gg and wotinspector.com
​World of Tanks NA had our first official season of ranked in World of Tanks! The previous two seasons offered on NA were still considered ‘beta’ seasons. So after playing all ranked seasons up to this point I’d like to dig into what worked, what didn’t and my (radical?) suggestions on improving it.

​To accomplish that I would make an unlimited number (or high number) of divisions, with identical rewards for completing each one, or alternating rewards. Once you complete your first division you get placed on the leader board and you become ranked on your chevron efficiency. After that you are encouraged to keep playing because you can earn rewards for each additional new division you complete.

To put it simply I would decouple the ranking system (chevron efficiency) from the progression system.

Next I would like to expand on the bonus battle idea. Encouraging players to play with more variety of tier 10s will help prevent a meta forming of only specific vehicles in use. To do this I would eliminate the qualifying matches which determined how many bonus battles you would get. I would then give everybody a single bonus battle for all of their tier 10s. All bonus battles will refresh daily, just like traditional x2 exp, or it will refresh the same day if the player has completed all of their available bonus battles of tier 10s that they have in their garage. Since I’ve decoupled the progression system from the ranking, an essentially ‘unlimited’ bonus battle system shouldn’t impact the ranking if everybody is on equal footing.

​Finally I would address the most frustrating part of the system which is falling back and losing chevrons. I would do this with a trailing locked rank. Once you lose maybe 4 to 6 chevrons you cannot lose any more, and then this locked rank will go up as you go up. So it's a trailing protection that will prevent consecutive chevron losses from destroying your progress. At the same time all battles are counted in your overall efficiency. If you keep losing at your trailing stop you won’t lose progression but your rank on the leader board will drop with every loss. What this would do is disconnect your leader board standing from your sense of progression. Alternatively you could just add a much larger amount of protected ranks instead of the trailing stop.

Lastly I would make sure to run ranked seasons outside of global map, and campaign seasons. Since the time frame is during prime time for clan wars, clan members have to sacrifice their ranked time in order to fulfill clan commitments. I would also widen the time frame by 1 hour earlier and 1 hour later.

With these changes players won’t stop playing after completing 3 divisions. Players are encouraged to play many different tanks. Ranking is based on your efficiency and not your ability to consistently progress, and you have an easier time progressing overall alleviating that feeling of losing all of your progress, and continually rewarding you when you do advance.
I think fellow CC Guido1212 Summarized my reasoning nicely:

Yep, exactly my point. Also those highly efficient players earn a high spot on the leader boards - and unique cosmetics in garage and in game to display their accomplishments.

Improve on the 'Role EXP' by adding more weight to the role exp compared to regular exp. Perhaps there are even more changes we could suggest to encourage fighting as a team, and making plays.

Wheeled tanks can make or break a match. I would not prevent them from queuing or even limit their numbers. My suggestion for ranked, AND for random queue is to set up a sub-category for wheeled tanks inside the light tank system, and force match maker (MM) to place an equal number of wheeled tanks on both teams.

In previous seasons it felt that as you progressed in the ranked system, you’d be playing against more skilled players. This effect was somewhat reduced with the new divisions and the new bonus battles. Since my previous idea would decouple progress from ranking, we would want the new ranked MM to try and match teams based on chevron efficiency percent not on progress. As long as there is equal numbers of roughly the same chevron efficient players are on both sides, it should generally keep from building teams of massive skill on one side (probably at the expense of longer queue times). To be clear I'm not suggesting we prevent low efficient players from getting into a match with higher efficient players. I'm suggesting we place equal numbers of those groups on both teams (that should help with queue times).

Reward tanks... Whether those tanks are too strong or not doesn’t really matter. Giving a player access to a vehicle that the rest of the player base doesn’t have access to is simply unfair. Providing some players access to exclusive options and not all players is an unfair advantage, perceived or otherwise. All players should have equal access to any assets allowed in the mode. Allowing reward tanks means not all players are on equal footing which completely undermines the idea of a ranked competitive environment. I would disable all vehicles in ranked that cannot be obtained through the tech tree or bond shop. 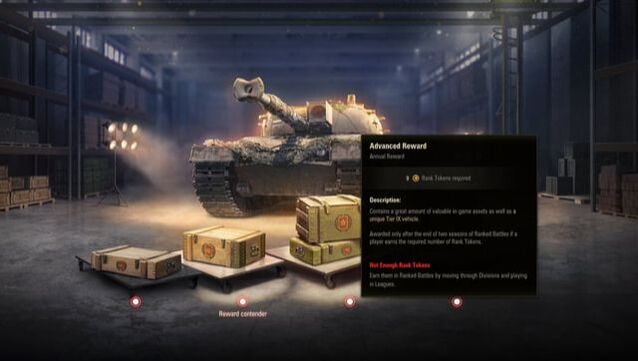 "Contains Great Amount of Valuable in-game assets" - just a little ambiguous
The reward system is really the only part of ranked that I don’t think needs much tweaking. The only deficit was that I had no incentive to keep playing ranked after completing the 3rd division. With my previous suggestions of unlimited or a large number of divisions would address this problem. Unlimited bonus battles, of course, requires the review and modification of chevron requirements. Also with unlimited divisions you’ll want to tweak the rewards too.
​
By decoupling progression from ranked placement you also make it very easy to differentiate what rewards are exclusive to the top ranked players and what rewards are available to simply participating in the game mode. Personally I think the top players should be given cosmetics and badges, and maybe a small bonus of in game currencies. Beyond that I think everybody should be able to obtain featured items in the ranked game mode. The more they play the more items they can unlock for themselves. The best players don’t need more in game advantages. They should be recognized for their skill, and rewarded with cosmetics to display their prowess in garage and in game.
Overall this season of ranked, at least in my opinion, was much better than the previous two beta iterations. If wargaming keeps working on the formula I think this could become a regular game mode that players look forward to.